Undoubtedly, the most visited place in Indian state of West Bengal, by people from all around the world, is Darjeeling. It is the main town of the namesake district of Darjeeling. With its location in the altitude of 6700 ft in Mahabharata Range of Himalayan Mountains, this place is rapidly addressed as the 'queen of the hills'. Legend says the name of Darjeeling came from either Sanskrit words 'Durjaya Linga', representing almighty Lord Shiva or Tibetan words 'dorje' and 'ling', meaning the 'thunder scepter of Lord Indra' and 'land' respectively.

Darjeeling creates a mesmerizing attraction to the tourists and travelers. The snow-white peak of Mt. Kanchenjunga, the third highest peak in the world, is seen reflecting the orange color of the rising sun and Mt Makalu gives it company to enhance the level of your experience of watching sunrise from Tiger Hill. Even Mt Everest is seen partially in cloud-free days with clear sky. The water bodies including Senchal Lake are very popular and frequently visited by people for picnic and relaxation purpose. The restaurants and hotels nearby the lake provide good food and comfortable accommodation. Researchers, educationists and students prefer the Himalayan Mountaineering Institute, Botanical Garden, Padmaja Naidu Himalayan Zoological Park, Dowhill Eco Park etc. for their expedition or seminars in the sublime version of nature. The photographers, nature lovers, bird-lovers regard these places as their pilgrims. As for the religious people, the Observatory Hill is perfect place to halt because of Mahakal Temple and Bhutiya Busty Monastery, representing Lord Shiva and Lord Buddha respectively. The Japanese Peace Pagoda is an image of giving shelter to people under the shade of peace. The mountain water of Chunnu Summer Falls that roles downwards through rocky terrain and the beautiful flowers blooming around make the Rock Garden an exquisite place for spending your day having a picnic or relaxing in the lap of nature. The most amazing it will be to watch the surrounding of Darjeeling in a 'joy-ride' on toy-train and passing the spiral track through a tunnel in Batasia Loop. It is a narrow gauge railway service, provided by Darjeeling Himalayan Railway between the railway stations of NJP and Ghum.

Along with the sites to visit, the people, their culture, life-style, food –everything is so pleasing about Darjeeling that haunts the travel mongers to come and experience the exquisite craft of almighty universe. One cannot ever forget a tour experience in this place.

Visit early morning when the first rays of the sun kiss the Mt. Kanchenjunga and give it a golden color. To visit the hill, wake up at 3AM in the morning. You can taste some excellent tea on your way to the hill, Tiger Hillwhich will provide much needed warmth on cold Darjeeling mornings. Tiger Hill is located 16kms. from Darjeeling town and above Ghoom.

It's the highest point in the Darjeeling area at an altitude of 8482 feet (or 2590 meters). The best season to see the dazzling snow covered peaks as the sun rises. From Tiger Hill you will get almost 360 degree view of the Darjeeling area including that of the entire Eastern Himalayan range. If you look towards north, you will see the landscape of Darjeeling Town. And in the background is the stupendous snowy range. Just before the sun comes up, the peaks begin to emerge. On a clear day if the mist doesn't play foul, you can even see the world's highest peak Mount Everest 29,029 ft (8,848 meters) which lies in Nepal and also the Mount Makalu 27,769 ft (8,464 meters). in the Tibet's Chomol Hari Mountain which is said to be world's most beautiful peak.

A scenic place near the tiger hills. This place has popularly come up as a picnic spot among the tourists. The lake supplies drinking water to the town of Darjeeling. 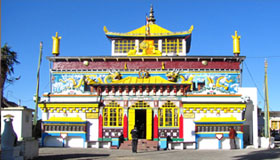 There are bells, ornate thanka scrolls and drums inside the monastery. Like many other monasteries in and around Darjeeling, this gompa is also a storehouse of some rare Buddhist manuscripts. Located at a distance of about 8 km south from the main town of Darjeeling, this gompa has become a destination for people seeking peace and serenity. The gompa is located nearby Ghoom station. One can also reach the gompa from Hill Cart Road as it is situated just below the road.

Batasia Loop, a massive railway loop around 5 km from Darjeeling is a great place to enjoy a 360 degree view of the beautiful landscapes of Darjeeling and the majestic Kanchenjunga range. 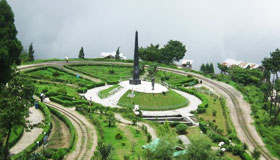 Commissioned in the year 1919,Batasia Loop Batasia Loop commands wonderful view of the serene surroundings with snowcapped mountains of the Eastern Himalayas. There is also a memorial to the Gorkha soldiers of the Indian Army who sacrificed their lives after the Indian Independence in 1947.

Batasia loop gives a fabulous experience to all of its visitors, as one stand on one side of the garden and see the toy train making a complete loop while hooting its whistle along the way and trying to negotiate the spiral track with a double loop.

Padmaja Naidu Himalayan Zoo is a unique Zoo. zoo in the town of Darjeeling in theIndian state of West Bengal. It is situated at an altitude of 2133mt. the largest high altitude zoo in India. against the glorious back ground of the Mount Kanchenjunga. The zoo was opened in 1958, The park is named after Padmaja Naidu 1900-1975, the governor of West Bengal 1956-1967 and the daughter of Sarojini Naidu the nationalist leader, poet.

The Zoo specializes in breeding animals adapted to alpine conditions, and has successful captive breeding programs for the Snow leopard, the critically endangered Himalayan wolf, and the Red panda. The zoo attracts about 450,000 - 500,000 visitors every year.

The Himalayan Mountaineering Institute was set up following the successful ascent of the Mount Everest-the highest peak in the world by the local hero Tenzing Norgay Sherpa and Sir Edmund Hillary on 28 May 1953. 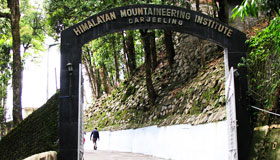 Himalayan Mountaineering InstituteThe institute has an interesting Everest Museum and also offers some mountaineering and adventure courses. Situated on the Jawahar Parvat, the institute is famous for its unique collection of mountaineering equipment and findings. Apart from Tenzing, legendary mountaineers like Nawang Gombu(the first man to climb Everest twice) and Lattoo Dorjee Sherpa have helped build the reputation of this pioneering institute. The institute is presently under the purview of the Ministry of Defence, Government of India and its museum is worth a visit.

Dhirdham Temple is built in the style of Kathmandu's Pashupatinath temple adds to the varied religious architectural styles of Darjeeling. This temple is also very famous for its unique architectural structure and blend of attractive styles. For those people who love to worship God visit this temple.

This point provides one of the breathtaking views of Kanchenjunga peaks. This place is also very sacred for the Hindus and the Buddhists as there are temples and the monasteries at this place. The Kali temple is decorated with the colorful flags. Be aware of the monkey groups as some these are very aggressive.

About 10 minutes by car, you will reach a wonderful area that is symbolic of peace and tranquility. Located in the Jalapahar hill, the Japanese Temple is built in traditional Japanese style where you can join the prayers and feel the spiritual peace amongst humming and chants. Close to it is the Peace Pagoda where there are four large avatars of Lord Buddha. The view from the top is magnificent. You can see the snow peak range from here including the Kanchenjunga.