The Indian state Sikkim is completely encircled and locked by land portion in southern Asia. Indian state West Bengal lies to its south, Bhutan and Nepal to the east and west respectively. China’s Tibet region covers the area to north and east. Being in the mid of four countries, Sikkim is an internationally important place with diversity in everything and thus officially speaks 11 different languages including Hindi, English, Sikkimese, Nepali, Lepcha, Rai etc.

You can hear about numbers of legends behind the name of Sikkim like in history it is mentioned as 'Indrakil' meaning the 'garden of Lord Indra' or in the Lepcha language it is called as 'Nye-mae-el' meaning 'paradise'. The Tibetan name 'Drenjong', which means the 'valley of rice', represents the agricultural importance of this place.

Sikkim is located in the hill and mountain areas of the Himalayas. Mt Kanchenjunga, world’s third highest peak, is situated in the border of Sikkim and Nepal and most of the areas of Sikkim are covered in snow in winter. Naturally these make this place perfect for tourism which is the main source of income here after agriculture. The capital and largest city Gangtok is one of the most beautiful places to visit here. Another place that should be mentioned is Pelling. Sikkim’s most attractive point is the 28 snow-clad colossal mountain peaks of Himalayan range. Besides, several glaciers, high altitude lakes like Gurudongmar, Tsomgo, Khecheopalri etc. are major tourists attractions with Seven Sister’s Waterfall, hot springs like Reshi, Yumthang and many more. Fambong Lho Wildlife Sanctuary, Kanchendzonga National Park, Singba Rhododendron Sanctuary, Kyongnosla Alpine Sanctuary are some of the great preservation centers of Himalayan flora and fauna. You will be mesmerized to watch the surrounding from the viewpoints in Singhik, Hanuman Tok, Ganesh Tok and lot more places. The Kirateshwar Mahadev Temple in Legship, the monasteries of Rumtek, Pemayangtse, Tashiding etc are regularly visited by religious people. The gold-plated top and architecture of Do-drul-chorten is very charming. If you are enthusiastic about adventure and sports, you must not miss Sikkim to visit at least once in your whole life-time. You can trek to Kanchenjunga, Sandakphu or Dzongri, or you can join river rafting Teesta or Rangeet rivers. The dense forests are suitable for safari and needless to say, mountaineering and mountain biking is one of the most popular sports here. Mt Katao is very much liked by the experts for mountain climbing. The hills and valleys make it perfect to launch and land a paraglide and have a flight over the awesome landscape of Sikkim. Once you enter among all the different sites and activities of this place, you will leave with full satisfaction of amazing experience.

A lake at 3753meters impossible you eill say but it is a fact. Changu Lake is 38kms. From Gangtok on the Gangtok Nathula High Way which forms a part of the old trade route from India to China. Before 1962, caravans of mules carrying goods used to ply on this rout. Tsomgo LakeThe road has less gradient and the vegetation adopts an alpine nature. 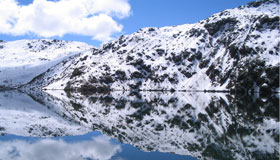 About a kilometre ahead of Kyongnosla and about five minutes walk from the road side is the Tseten Tashi cave which is about twenty feet high and so named after a naturalist of Sikkim who was also the private secretary of the Chogyal.

Changu Lake is cool placid water harmonises with the scenic beauty around which is doubled by its reflection in the lake. A small temple of Lord Siva is constructed on the lake side. Primula flowers and other alpine vegetation grow around the lake, which has an average depth of 15 meters, lend a pristine beauty to this place. During the winter months the lake becomes frozen. The lake itself derives its water from the melting snow on the mountain around. During the olden times lamas used to study the colour of the water of the lake and forecast the future. If the waters of the lake had a dark tinge it foreshadowed a year of trouble and unrest in the state. The lake has a few rainbow trout and if you are lucky you may catch a glimpse at them.

Changu Lake which is hardly 20kms. Away from the famous Nathula Pass and about 400 kms. From Lhasa, falls in the restricted area and hence an Inner Line permit , which can be obtained from the Police through the Tourism Department Of Sikkim is required by visitors to visit this place, Foreign Nationals are also permitted to visit the lake.

This temple lies on the road between the Nathula and Jelepla Pass. There is a touching story behind the establishment of the temple. Harbhajan Singh was a soldier in the Punjab Regiment. In October 1968 while escorting a column of Baba Mandirmules carrying provisions he fell into a stream and drowned. A few day latter he appeared in the dream of colleague of his and expressed a desire that a monument in his memory be built. His colleagues in the regiment considered the dream to be auspicious and felt that if they fulfilled his desire he would protect them from aggression and mishap. The temple was built and has over the years acquired the status of a place of pilgrimage. Visitors leave a bottle of water which they then arrange to collect a few days latter. It said that drinking the water is wish-yielding.

Nathula at 4320meters (14400ft) remained as the major Pass connecting Sikkim to Tibet till 1962. It was through this pass that trade between the ywo countries used to be carried out with trains of mules carring wool, gold, rock salt and borax and taking back essential items of daily use from India. From Nathula yathung the erstwhile famous trade post in the Chumbi Nathula PassValley in 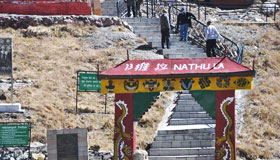 Tibet is just 30 kms. Away. During the clear weather the road winding down the Chumbi Valley can early be seen and on the eastern horizon looms the Chomolhari peak that is situated in Bhutan. The Chinese soldiers are also visible a few metres away from the barbed wire that makes the border between the two countries. The exchange of mail taken place every Thursday and Sunday with the Indian post man crossing over to the Chinese out post and meeting his counterpart to carry out the transaction. An engraved ston also known as the Nehru stone marks the visit of the Late Prime Minister of India Jawarlal Nehru to Nathula in 1958. The Nathula border was quite during the Indo China war in 1962. In 1967 there was a major confrontation in which many lives on both side lost. A memorial has been built in honour of the Indian Soldiers who lost their lives in this battle. The trade route through Nathula was reopened on 6th july 2006 for a few items. The Nathula Pass can be visited by Indian tourists only on selected four days a week.

Pelling is a town in the district of West Sikkim, India. Pelling is nestled at an altitude of 2,150 m (7,200 ft). The town is located at a distance of 10 km from the district headquarters of Geyzing. Pelling a scenic tranquil but rapidly awelling hamlet in Sikkim. Pelling become a famous tourist destination for magnificent snow caped mountain view till as recently as 1995, 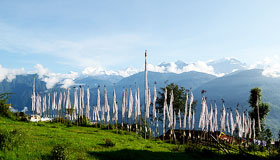 Pelling nondescript Pellingvillage with a few hous. Apart from Mount Kanchendzunga, pelling provides some of the best views of other mountain like Kokthang, Rathong, Kabru Dom, Shimvo and siniolchu all over 20,000ft. Pelling is an ideal place for tourist, situated on top of the ridge overlooking valley and mountains.

Old monasteries, waterfalls, shot trek rout, villages. Pelling is an important destination in West Sikkim, several mordan and international standard hotels and resort have been created in around Pelling. These Hotels and Resort offer luxurious stay.

The word Tinchuley Namchi, Namchi is situated at an altitude of 1,675 m (5500 feet) above sea level. Namchi is deistic head quarter of South. It is situated at a distance of 92 km from the state capital Gangtok literally translating as 'top of the sky' is the fast emerging as a tourist destination. Set in a picturesque location, Namchi offers an unmatched view of the Khangchendzonga Namchirange and the Rangit valley. Here you can visit the Sherdup Choeling Monastery and the Dichen Choeling monastery. Around two kms from Namchi is the old Ngadak monastery which is now being renovated. Situated on a hill just above Ngadak monastery is the very attractive Rock Garden, which is full of rare flowers and plants and also offers breathtakingly beautiful views. Namchi hosts the very popular Namchi Mahotsav, a Tourism, Culture and Food Festival, every year in October. A flower festival is also held annually. 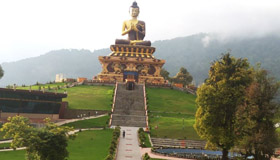 The 135 feet high statue of Guru Padamasambhava is present at Samdruptse near Namchi at a distance of 75 kms from Gangtok. Samdruptse literally means 'wish fulfilling hill' in the Bhutia language. A unique, awe inspiring and gigangtic 135 feet high statue of Guru Padamasambhava is installed atop Sampruptse. It is the highest statue of Guru Padamasambhava in the world. His Holiness the Dalai Lama laid the foundation stone of the statue in October 1997. It took nearly three years to complete the statue. There is also the Namchi Rock Garden located between Namchi town and Samdruptse. This popular garden has many attractive plants, flowers and species of trees. A number of waiting sheds, view points and waterbodies along its footpaths have been provided. A neat and clean cafeteria serves the tourists and visitors well.

The tranquil little village and surrounding of Yuksom offer ample opportunity for experiencing the history of Sikkim. Yuksom situated 119kms from present Capital Gangtok and 34kms. From Pelling. Yuksom is a large village with a total area of 812.16 hectares (2,006.9 acres) situated at an average altitude of 1780 m. Introduction of Buddhism to the state from Tibet is as 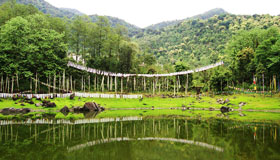 early as in the 9th century. In the struggle for power between the "Yellow hats" and the "Red hats" in Tibet, the latter had migrated to Sikkim and converted the mild mannered Lepchas (the aboriginal inhabitants) to Buddhism. In the 13th century, relations between Sikkim and Tibet were cemented by a "Brother hood treaty" signed between the Lepcha chief Thekong Thekand Tibetan prince Khe-Bhumsa at Kavi, in north Sikkim. 1641, Lama Lutsum Chembo holy monk travelled from Tibet to Denjong (meaning hidden country) now known as Sikkim to propagate the Buddhist religion.

Gangtok is the capital and largest town of the Indian state of Sikkim. Gangtok is located in the eastern Himalayan range, at an altitude of 5,800 feet (1,800 m) and covers an area of 2.54 square km. The town's population of 98,658 belongs to different ethnicities such as Nepalis, Lepchas and Bhutia, Gangtok is at the centre of Sikkim's tourism industry. In 1894, Thutob Namgyal, the Sikkimese monarch under British rule, shifted the capital from Tumlong to Gangtok, increasing the city's importance. 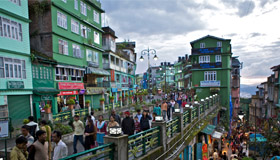 A new grand palace along with otherGangtok state buildings was built in the new capital, In 1975, after years of political uncertainty and struggle, including riots, the monarchy was abrogated and Sikkim became India's twenty-second state, with Gangtok as its capital after a referendum. There are densely forested regions around Gangtok, consisting of temperate, deciduous forests of poplar, birch, oak, and elm, as well as evergreen, coniferous trees of the wet alpine zone. Orchids are common, and rare varieties of orchids are featured in flower shows in the city. Bamboos are also abundant. In the lower reaches of the town, the vegetation gradually changes from alpine to temperate deciduous and subtropical. The beauty painted Pagoda-like wooden house, whipping prayer flags, Lamas spinning wheels, views of snow cover peaks and smiling faces of the local people will make you understand that you have entered in to mystic town Gangtok.